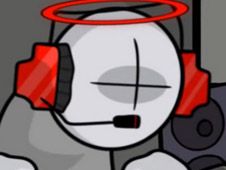 What is FNF vs Grunt Gaming?

Grunt was doing what he is always doing, which is gaming when Boyfriend burst into his house, so now the two of them need to rap battle, with you playing on the side of our protagonist and helping him win the rhythm battle. Not only is Grunt a brand new original character, but he also brings along three original songs to battle on:

Defeat Grunt and show him who is the real music gamer!

You can battle this character in either the story mode or free play mode, where you have to give your best to reach the conclusion of the songs, playing them so well that the bar in the middle stands in your favor.

To achieve this you will use the arrow keys, as you have to press them at the same time as the arrow symbols above BF are matched with one another, and if you do this without too many mistakes, you win!

Instead, if you press the keys at the wrong times, or you press the wrong keys, you might lose after too many of these mistakes. Good luck, and give your best, as you always do!