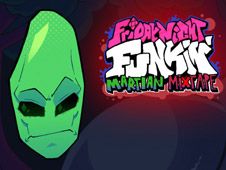 What is FNF vs Xigmund (Martian Mixtape) v2?

Xigmund is an alien from Mars who invaded Earth, and Boyfriend was the only one who could save our planet, and the reason for that is because Xigmund's preferred way to do battle is through music and rhythm, and since BF is a master of it, he was the best challenger.

Our protagonist already defeated him in the previous mod to feature him, but today we are bringing you something new, since we've got a brand new version where Xigmund also brought over his friends, this game featuring three new weeks, and a total of 13 songs:

Prevent the alien invasion by winning the musical battles!

You can try out all these weeks in the story mode, or you can pick songs randomly from the free play mode, but in either case, do your best to keep the tracks on rhythm, hit all the notes of the songs at the right time, and win by doing so until the end of the song!

This is done by using the arrow keys, keys that you press at the same time as the arrow symbols above BF match with one another, but not at any other time, since that is a miss, and having made too many misses in a row causes you to lose the game. Enjoy!