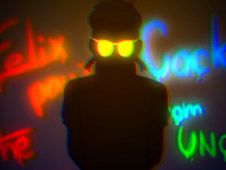 What is FNF Harrowing Echoes?

Welcome to FNF Harrowing Echoes, which so far is only a demo, but is already better than so many other FNF mods you've seen so far, and we are going to prove this from the get-go, because as soon as you start playing this game and battle Jix, the new antagonist, you are guaranteed lots of fun! Boyfriend has a mask, Jix is a hidden antagonist they meet on an alley, and we've got two custom songs for you:

Masked Boyfriend against Jix, who wins?

Since you are playing for Boyfriend, we hope you win, so focus through the songs so that you reach their end and turn the progress bar towards you. To do that, press the arrow keys at the same time as the arrow symbols above BF match so that you sing and play the song according to its chart.

Be careful not to press the keys too early, too late, or press the wrong keys, since that is a miss, and multiple misses in a row mean you lose the game. Enjoy!