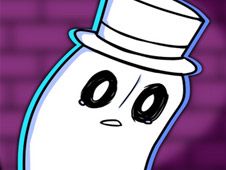 What is FNF Mid-Boss Matchups vs NAPSTABLOOK?

NAPSTABLOOK is a crying ghost who is a mid-boss from the Underground, where all sorts of monsters and scary creatures live, and you need to defeat them all in order to escape these ruins and get back to with Girlfriend to the surface before Daddy Dearest notices you've been gone. The song featured in this game is called Toby Fox's Ghost Fight.

Help Boyfriend have a better rhythm than a crying ghost!

You have to use the arrow keys to get the notes of the song at the right moment, so when you see the arrow symbols match above BF, make sure to press the same arrow keys, doing so until the end of the game to win.

You lose in the case that you have bad timing and press wrong keys at the wrong times too many times in a row, so focus all through the song to not allow that to happen.

Now, even if you're a beginner to the series, you've learned the rules, so let the fun begin right now, and don't hesitate to invite your friends to play this game as well, they will love it here!