FNF Vs Ankha (A Tail of Trouble) 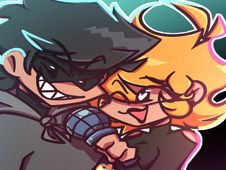 What is FNF Double Trouble vs Emma & Cuackbert?

It should already be expected that every day on our website you get to find and play some of the best new FNF Games online on the internet, just like it is going to be the case today when we are starting in full force with the game called FNF Double Trouble vs Emma & Cuackbert, where you get to battle two antagonists at the same time, and while they make a very good team, we are sure that if you focus and give it your best, as you always do, you will win!

Five custom songs are featured in this game:

Defeat the power couple of Emma and Cuackbert, right now!

The characters can be challenged in either the story mode or the free play mode, it's up to you, and in both of them, you have to give your best to reach the end of the songs and play them according to the charts so that the progress bar is pointed towards you.

Press the arrow keys at the same time as the arrow symbols above BF match with one another, in order to get the notes of the songs right, but don't press them too early or too late, because if that happens, you lose and have to start all over again from scratch!