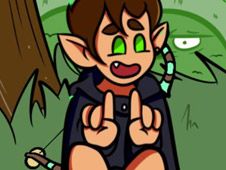 What is FNF vs Jay Forgotten Memories?

While in the forest, Boyfriend and Girlfriend happened upon Jay, a hooded elf who has lost his memories, and he believes that only if Boyfriend were to rap battle him, will he get those memories back, something that you have to work towards by winning the battles with this awesome rhythm game!

Can you beat Jay and bring back his memories?

When you see the arrow symbols above BF match with one another, press the arrow keys at the same time, but be careful not to press them too early or too late, since too many mistakes cause you to lose the game. Instead, if you keep getting the timing right and reach the end of the song, you will definitely win!

Choose if you want to play in the story mode or free play mode, and then give this game your best from start to finish, since that is how you get the most fun out of it!