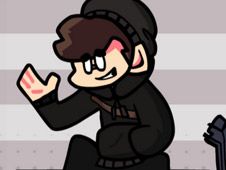 What is FNF vs Wilbur?

Wilbur is a womanizer from the E-Girls series, and since he is always hitting on girls, it was only a matter of time until he would try to steal Girlfriend from our protagonist, but BF should not worry at all, since you are now here to play the FNF vs Wilbur Mod and defeat him in a musical battle, something that you can do on two full weeks, with six songs in total:

Defeat Wilbur to stop him from stealing Girlfriend!

To play notes in this kind of rhythm game, use the arrow keys, keys that you have to press at the same time as the arrow symbols above BF match with one another, and keep doing this until the song ends to turn the progress bar towards you and win.

Be careful not to miss pressing the keys too many times in a row, because if that happens, you lose and have to start all over again, something you can't want to happen, right? Good luck, and enjoy!