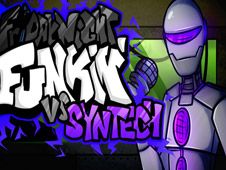 What is FNF vs SYNTECH (Virtual Vocalist)?

All sorts of strange antagonists appear out of nowhere for Boyfriend to face off in musical battles, with your help, of course, and the same is true right at this moment when our team invites you all to check out the game called FNF vs SYNTECH (Virtual Vocalist), where SYNTECH is a robot, so you know that his algorithms will make his rhythm perfect, so you have to step up your reaction time and defeat him nonetheless!

Defeat a robot in a musical battle, and continue on with the date with Girlfriend!

The game features three original songs that you can access in either the story mode or free play mode:

When you see the arrow symbols above BF match with one another, make sure to press the very same ones to hit the notes of the songs accordingly, and if you keep doing that until the end of the song, you win, simple as that!

Be careful about missing notes, because if you miss too many of them one after another, you will lose eventually, and have to start again from scratch, which you can't want happening, right?