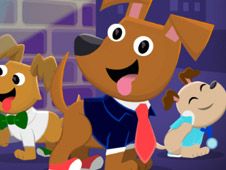 What is Puppy Quest?

The Odd Squad knows that you love puppies and animals in general just as much as they do, which is why Puppy Quest is the latest addition to the Odd Squad Games category of our website, where, if you've had tons of fun so far, you should be prepared to have even more of it, as only here is possible, where day after day we bring you awesome new games!

Take care of puppies and have fun with them and the Odd Squad kids!

The members of the Odd Squad, through some kind of technical problem, became turned into puppies by a special device, and now they need to return to their human forms because that is the only way they can return to their daily missions of saving the world!

That is why with them you will venture through various locations, such as the headquarters, the bakery, the park, and the observatory. The goal you have is to venture through each location and reach the door at their end.

At the point you have reached that door, there will be another special device waiting for them, and the puppies will be able to turn back into humans, and get back to work, thanks only to your help! Have fun!