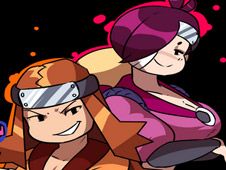 What is FNF: Shinobi Scramble?

Shinobi means ninja in Japanese, and this game is called FNF: Shinobi Scramble, it can only mean that Boyfriend is going to face some ninjas in musical battles, and the two ninjas he is fighting are women, and they are named Shuri and Ken after the ninja weapon called shuriken that probably many of you know from anime or other media from this country. This game features no less than three original custom songs for you, all named after weapons:

Ninjas have a good rhythm, show them an even better rhythm!

After picking between the story mode and free play mode of this game, give it your best to reach the end of the songs by playing their notes so well, following the chart correctly, winning when the song ends and the progress bar has turned towards you.

To play notes in this kind of game, press the arrow keys at the same time as the arrow symbols above BF match with one another, but be careful about missing the notes, because if you do that too many times in a row, you lose the game and have to start all over again.

Good luck, have the best time possible, and don't hesitate to invite your friends over for fun as well!