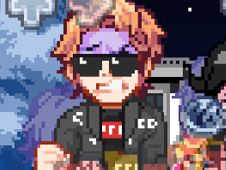 We've had an FNF SD mod online on our website before, and we really loved it, which is why we wasted no time at all to bring over for you a game in the same style, but one that focuses only on Week 6, where you have to battle against Senpai, an anime character from a dating simulation video game. What makes this new mod a must-play is that the original three songs of the character are remixed, and you even have two more additional songs, for a total of five awesome tracks:

Defeat Senpai once again, this time not just in SD, but on brand new tracks as well!

When you see the arrow symbols above BF's head are matched with one another, it is at that moment that you have to press the very same arrow keys, pressing them correctly until the end of the songs in order to become the winner.

But, be careful not to miss the moment to press the keys too many times in a row, because if that happens, you lose and have to start again, and you would not want that, right?

Good luck, enjoy, and stick around for more fun to come, as only here is possible!