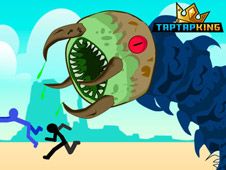 What is Monster Underground?

If today you were feeling like playing some brand new action games with monsters online, then it really is your lucky day, because one of the best such games we've seen in recent memory has just been added for you all here free of charge, and we're talking about a really cool new game called Monster Underground!

In this game you get to control a worm monster that lives underground, but who hates humans and uses them as food, which is why your goal in each level is not just to swim through the ground and eat it, which brings you gold, but, most importantly, go to the surface and eat as many stickmen as possible.

Be careful of the stickmen, since they also shoot at you, depleting your health bar, with the bar also depleting in case you stay too much underground, and run out of air. What is important for you to know is that you can grab the heart symbols when they appear, because they are health bonuses that will give you more life.

When you have made a certain amount of gold, you pass to the next level, and so forth, so keep eating the human enemies, no matter how strong they become down the road. Good luck, have fun, and don't hesitate to check out all the other cool new content that is to come for you here today!