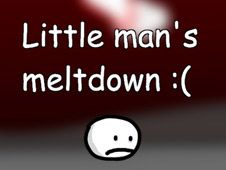 What is FNF vs Little Man’s Meltdown?

Little Man is tired of BF's antics, and he had a real meltdown, becoming really angry and loud all of a sudden, so now you and Boyfriend will have to calm him down, or maybe make him angrier, by defeating him in a musical battle, something that we invite you all to have right now with the game called FNF vs Little Man’s Meltdown!

Meltdown is the name of the song featured in this game, and it is a remix of the original one but with vocals from Little Man.

Defeat the Little Man in a musical battle!

In these rhythm games, to play notes of the songs when your turn comes, watch for when the arrow symbols above BF match with one another, and at the same moment you have to press the arrow keys on the keyboard, and if you keep doing it correctly until the end of the song, you win.

Be careful not to miss pressing the keys too many times in a row, because if that happens, you lose and have to start all over again from scratch, and why would you want that? Good luck, enjoy this game as only here is possible, and stick around for more fun to come, only here!