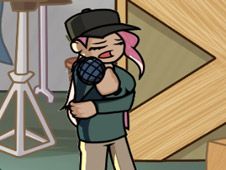 As you could already probably realize from her name, Celestia is a celestial being, an angel to be more precise, who works at a movie theater while being undercover as a movie, but she had to reveal her real form in front of Boyfriend when she saw him in the cinema since she wants to challenge him in a rhythm battle, something we hope you will help our protagonist win on the following custom songs:

Help BF defeat a literal angel in a music battle!

After you decide between the story mode and free play mode, give it your bets in either of them to reach the end of the songs and play all of the notes according to the charts in order to win.

How? Well, you use the arrow keys for it, pressing them at the same time as arrow symbols above BF match with one another, and keep doing so until the end of the song.

Know that if you miss pressing too many of the keys one after another, you lose the whole game, so don't allow that to happen if you don't want to lose the game. Enjoy!