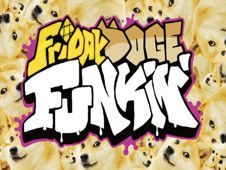 What is FNF: Friday Doge Funkin’ VS Doge & Walter?

People have taken pictures of Shiba Inus, some of the cutest dogs out of Japan, and because they make really funny faces and expressions, the dog has become a meme known as Doge, and even a digital cryptocurrency with the same name, so it was not at all surprising for us to see that on our website right now in the FNF Games category we could share with you the game known as FNF: Friday Doge Funkin’ VS Doge & Walter!

This game has a total of seven songs spread among two weeks:

Boyfriend VS the most memorable dog on the internet!

Well, for starters, know that you can go and face off against these antagonists in either the story mode and free play mode, as it is up to you, with the goal in both of them being to play all the notes of the songs and reach their end, which is when you become the winner.

To play notes you need to use the arrow keys, keys that you press at the same time as arrow symbols above BF match with one another, but be careful not to miss, because if you miss doing that multiple times in a row, you lose. Enjoy!