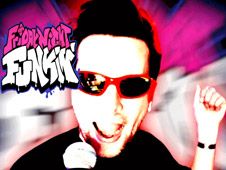 What is FNF: YuB rapping over South?

YuB is a rapper on the internet with his own YouTube Channel who has now appeared in the world of FNF Games, like many other internet celebrities before him, and you can now challenge him in a rap battle as Boyfriend on the song called South, one of the series' most popular songs so far!

Boyfriend Vs YuB, the hottest rap battle ever!

There are no two modes in this game, since there is only one song, and you need to do the same thing as before, which is to hit all the notes of the songs according to their charts, reach the end of the songs, and win!

Playing notes in this rhythm game is done using the arrow keys, so when you see arrows match above BF, you need to match the same arrows and the timing by pressing the keys at the same time.

If you keep at it until the end, you win, but be careful not to miss pressing the keys too many times in a row, or you lose the game. Good luck!