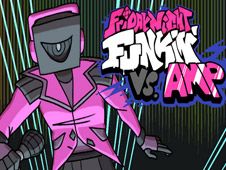 What is Friday Night Funkin vs AMP?

Boyfriend has face off against lots of robots so far, and it seems that he is far from being done with them, just like in this moment, when our administrative team invites you all to play the game called Friday Night Funkin vs AMP, where AMP is a brand new robot that has challenged BF, and trust us when we say that he has got the musical chops, which he will showcase on the following songs:

Boyfriend Vs AMP, Man VS Robot!

Choose to face off against this character in either the story mode or the free play mode, it's up to you, and in both of them, give it your best to have good timing so that you play all the notes of the songs according to their charts, reach their conclusion, and win!

How do you do it all? Well, you are going to press arrow keys at the same time as the arrow symbols above BF match with one another, and if you do it until the end, you win, but if you miss too many notes in a row, you lose, so be careful not to let that happen! Good luck!