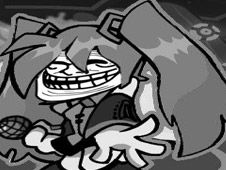 What is FNF: Blueballs Incident but trollge is the best girl?

FNF: Blueballs Incident but trollge is the best girl is quite the funny and creepy FNF mod at the same time, since the antagonist you are going to battle is Hatsune Miku, but not the cute pop star that you know and love, but this anime girl with the face of a Troll, just like those in the TrollFace series, making the experience both funny and scary at the same time! Help BF defeat this creature on the following custom songs:

Boyfriend Vs TrollFace Miku, the musical battle you did not know you wanted!

This character can be challenged in either the story mode or the free play mode, it is up to you, and in both of them, you have to give it your best to reach the end of the songs and play all the notes according to the charts!

This means that when you see arrow symbols above BF match with one another, you need to press the same arrow keys to boot and don't miss to do it too many times in a row, or you lose the game and have to start again from scratch! Enjoy!