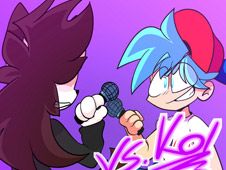 What is Friday Night Funkin with Koi?

Koi is a hybrid between a human and a fox, and he is also the newest antagonist that Boyfriend has to face off against in a musical battle, so, as always, you are here to play the game and help our protagonist win, something that you will be able to do on multiple custom songs made for this week:

Boyfriend Vs Koi, the hottest music battle of the moment!

Well, start off by choosing to face off against the character in either the story mode or free play mode, and then give it your best and focus so that you have a good rhythm and reach the end of the songs while playing all the notes along the way.

That is done using the arrow keys, keys that you have to press at the same time as the arrow symbols above BF match with one another, and if you keep doing it until the song ends, you become the winner, simple as that.

Don't miss too many notes in a row, or you lose. Good luck we want to wish you all, and all the best, as always!