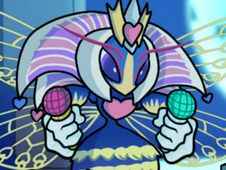 What is FNF vs Queen Bee Sectonia?

Sectonia is the name of a huge-ass Queen Bee, a literal one, not just a moniker, and she has left the world of bees in order to challenge Boyfriend to a musical battle, as she wants to assert dominance over the humans, but we know very well that you and BF will not allow that to happen, but instead win the fight, as you always do!

As expected, this is a full mod featuring three original custom songs:

Help BF defeat the Queen of Bees in a music battle!

You can challenge this new insect character in either the story mode or the free play mode, it is up to you, and in both of them, you've got to give your best to reach the end of the songs by playing all their notes properly, without missing too many of them, because you then lose.

Notes are played using the arrow keys, as you press the keys at the same time as arrow symbols above BF match with one another, and you have to keep at it until the song ends. Good luck, and enjoy!