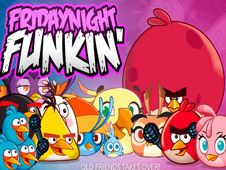 The FNF game with Angry Birds that you will now be able to play for free on our website is a skin mod, meaning that the music remains as per usual, but all the characters have been replaced by popular characters from Angry Birds, with the Red Bird taking on the role of Boyfriend, and the Pink Bird becoming Girlfriend! Other than that, all the weeks remain the same, songs included.

FNF with Angry Birds, what could be better?

You can choose to play this game in either the Story Mode or the Free Play mode, it is totally up to you, and in both of them, you've got to give your best to reach the end of the songs by playing all their notes in order to win.

This is done using the arrow keys, keys that you have to press at the same time as arrow symbols above your character match with one another, and if you do it until the conclusion of the game, you win!

Be careful not to press keys too early or too late, or press the wrong keys, because if you make too many of these mistakes in a row, you lose the game and have to start it again from scratch. Good luck, and enjoy!