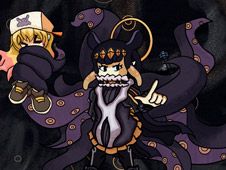 What is Hololive Funkin Ina Week?

Ina is currently one of the most beloved HoloLive YouTubers out there, an anime girl of which we know that you want more of, so of course we are very happy that she is featured in the latest FNF mod online of our website, a mod called Hololive Funkin Ina Week, where you can challenge her on various songs in order to escape the world of AniTube:

Boyfriend Vs Ina, a HoloFunk battle!

When you see that arrow symbols above BF's head are matching with one another, it is at that time that you also have to press the same arrow keys, since that is how you play the notes of the songs according to their charts, and if you keep at it until the song ends, you become the winner.

Be careful not to miss pressing too many of the keys one after another, because if that happens you lose and have to start again from scratch, and you can't want that, right? Good luck, and enjoy!