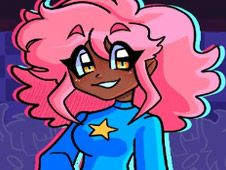 What is FNF: Manic Multiverse?

Kiki, Vesper, and Crash are three lovely girls that you probably already know from the Manic Multiverse, and they represent the newest foes that you and BF have to defeat in a musical battle of rhythm, all in this awesome new game called FNF: Manic Multiverse, where you've got one original custom song for each of the girls:

Defeat the three Manic girls in a rhythm fight, now!

You can go up against them in either the story mode or the free play mode, it is totally up to you, and in each of them, you've got the same goal, which is to play the notes of the songs according to their charts, all the way up to the end.

To do this, press arrow keys at the same time as arrow symbols above BF match with one another and keep doing so until the end of the song to win.

Focus so that you don't press the keys wrong too many times in a row, since that means losing the game and having to start all over again from scratch. Enjoy!