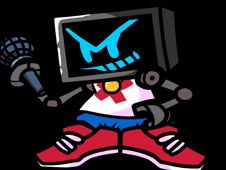 What is Friday Night Funkin Inverted?

A mess has just happened in the world of FNF Games, and that is that various characters have switched places, both in the roles that they assume, and in their appearance, which is why you can see things such as a Boyfriend character who has the head of Hex, Girlfriend looks like Sarv, Daddy is Monster, Pico is Pump, Senpai is Mom, Skid is Tankman, Spirt is Bob, and many more!

The songs have also been shuffled around, having these three following weeks at the moment:

Win all the rhythm battles to bring the characters back to their original forms!

Choose to battle the new characters in either the story more, or the free play mode, and play all the notes of the songs when your turn comes, so that you reach the end of the songs, the progress bar turns in your favor, and you win!

When the arrow symbols above Hex Boyfriend match with one another, that is the moment when you have to press the same arrow keys, and you have to keep doing so until the end of the song to win, but if you miss doing it too much, you lose.

Good luck to you all, and we hope that just like us, you will have tremendous amounts of fun with this game!