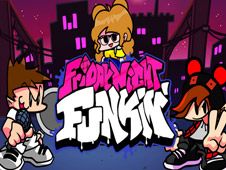 What is FNF Vs KreekCraft?

KreekCraft is a YouTube channel that has a series known as TIMMEH Series, and characters from it are now featured in the mod known as FNF Vs KreekCraft, a skin pack mod where BF becomes Bf-Kreek, and he has to battle various characters from the series, the already classic songs that you know and love from Week 1 to Week 4.

Challenge all the KreekCraft characters in a rhythm battle, and win!

Start off by choosing between the Story Mode and the Free Play mode, and then give it your best to reach the end of each song, where you have to play all the notes of the songs at the right time. This is done using the arrow keys, so press the arrow keys at the same time as arrow symbols above BF match one another.

Be careful not to miss doing that too many times in a row, because too many consecutive misses mean you lose the game and have to start it again from scratch. Good luck, enjoy, and make sure to stick around for even more fun to come!