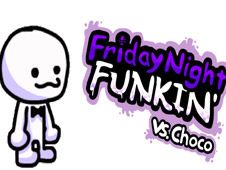 What is FNF vs Choco?

Choco is the girl who created the FNF but Bad mod, the original one, and she has now been made into a stick figure against which you and Boyfriend will have a rhythm battle, a battle we hope you all win, in either the story mode or the free play mode, where you have a total of five awesome songs:

Do you have what it takes to battle and defeat FNF's Choco?

Well, if you think so, then during the songs, focus, and when you see arrow symbols above BF's head being matched with one another, make sure to press the very same arrow keys on your keyboard, and keep doing it until the end of the song to win, when you will see the progress bar turned towards you.

Be careful not to miss pressing too many keys one after another, because if that happens, you lose and have to start playing the game again from scratch. Good luck, and enjoy!