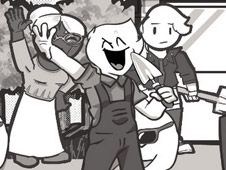 What is FNF: Friday Blight Funkin’ vs Blite?

Blite is a character from a game called Roseblight, and, somehow, Boyfriend ended up in his universe, so the only way for him to get out of it is by defeating this character in a music battle, something you help him out right now if you try out this mod, a mod that has three original custom songs for you:

Start by choosing between the story mode and free play mode of the game, and then give it your best to reach the end of the songs and play all their notes along the way, because if you do that until the end, and the progress bar has turned towards you, you will have won.

This means that when you see arrow symbols above BF matching one another, you have to press the same arrow keys, but it also means that if you miss too many notes in a row, you lose and have to start all over again from scratch. Good luck, and have fun!