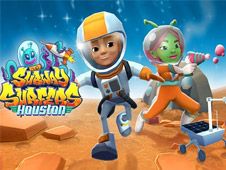 What is Subway Surfers Houston?

Houston, we don't have a problem, but only good news! This highly-popular city from Texas, from where Nasa sends people out into space on rockets, is the latest city that players on our website have the chance to have fun exploring through new Subway Surfers World Tour Games, games that we always make sure to bring over as often as possible!

Surf through Houston's railway system, and don't get caught!

Well, just like in other endless running games of this series, what you do is use the arrow keys to go left, right, jump up, and slide down, so that you avoid the trains, roadblocks, and various other kinds of obstacles, as you try to make a big distance forward, and grab as many coins along the way as possible.

Hitting obstacles too many times in a row means you will get caught by the police chasing you, so don't let it happen! If you find power-ups and upgrades along the way, don't hesitate to grab them, since they make you faster, better, and help you grab more coins.

It's that simple, so start now, and enjoy, after which we invite you to travel the world through other games of this category!