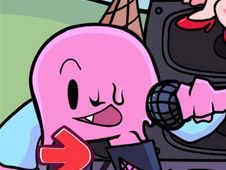 What is Friday Night Funkin vs Ice Cream?

You never know what kind of antagonist Boyfriend will face off next, just like it is happening right now today when we are inviting each and every one of you to try out the amazing new game called Friday Night Funkin vs Ice Cream, where an ice cream has come to life and challenged our protagonist to a music battle, one we hope you win, and we will teach you how to do it right now and here, starting by telling you the name of the four tracks featured here:

Melt the Ice Cream with music, and win!

You can pick to fight off against this character in either the story mode or the free play mode, it's totally up to you, and in each of them you've got to reach the end of the songs by playing all their notes according to the charts.

This is done using the arrow keys, keys that you have to press at the same time as the arrow symbols above BF's head match one another until the progress bar has completely moved in your favor.

Be careful about missing notes, because if you do that too many times in a row, you lose the game and have to start it all over again from scratch. Good luck!