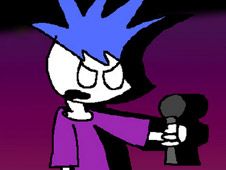 What is FNF vs Bill Wurtz?

Bill Wurtz is a cartoonish boy with blue spiky hair who is trying to be a punk dude, and he is the latest antagonist that you and Boyfriend will be facing off against in a musical battle, and despite this mod called FNF vs Bill Wurtz being a demo, this game has quite a few songs for you to enjoy, in both the story mode or free play mode:

Punk out with Boyfriend and Bill Wurtz!

After picking the way you want to play the game, watch for when arrow symbols above BF's head match one another, and press the same keys until the end of the songs in order to win.

Be careful about missing notes, because if that happens too many times in a row, you will lose the game and have to start it again, something we don't wish for any of you. Good luck, and enjoy!