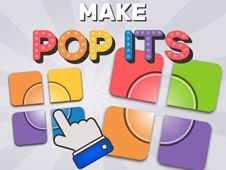 What is Make Pop Its?

There has nothing that has taken over the world of toys and kids as much at this moment than Pop Its, the toys you can see in almost any store you go, which is why we know that Pop Its games online are just as popular, with our team now providing you all with a brand new one, a game called Make Pop its, which gives you the unique and awesome chance of creating your own toys, according to your own imagination!

Create your own Pop Its, then pop them all!

You will have a grid that acts as the playing board for yourself to create the pop its, and from the bottom of the screen, you add tiles in different shapes, with the goal being to arrange them so that you form a bubble in the middle of it.

Once that bubble has been formed, or multiple of them in further levels, tap on them to pop them all, and then the level is cleared. Each new level you are given more pieces to play with, allowing you to be more creative.

It's all that simple, and it's an even better experience than the other friv games with this toy you've played before, so we hope you start giving it a go right now!