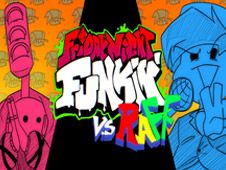 What is FNF vs Raff?

Raff is a character that looks like a traffic light who has come to life, making him one of the most unique villains from the Friday Night Funkin Games series on our website, where right now we hope that you will give a shot to his mod and give it your best to defeat him on all his custom songs:

Don't let Raff stop Boyfriend on the highway of music!

After you've made your pick between the story mode and the free play mode, when you are dueling in a song and see arrow symbols above BF's head matching one another, you need to press the same arrow keys yourself, and keep at it until the song ends for you to win, simple as that!

Be careful about missing notes, because if that happens too many times in a row, you lose. Those are the simple rules of these games, so give your best right now, and start the fun!