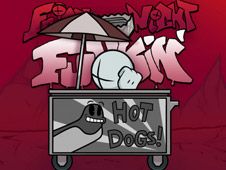 What is FnF Vs. Grunt Hotdog Vendor?

FnF Vs. Grunt Hotdog Vendor is the latest FNF mod to have been inspired by the Madness Combat series that so many kids all over the place love really much, and today in it you are going to face off against a grunt that is usually seen cooking and serving hot dogs, and he brings along two awesome tracks for you:

In both the story mode and free play mode, you need to reach the end of the songs by playing all their notes, meaning that when arrow symbols above BF's head match one another, you will have to press the same arrow keys on the keyboard, and keep doing it until the song reaches its conclusion.

Make sure not to miss pressing the keys too many times in a row, or you lose and have to start again. Good luck, and have fun as only here is possible!