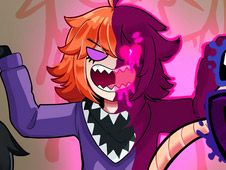 What is FNF vs Ambion Corrupt Frenzy?

Ambion is a demon girl that Boyfriend has to defeat in a musical battle of rhythm in order to escape his destiny to go to hell, and we hope that you are ready to give him all your help with our latest FNF mod, a mod called FNF vs Ambion Corrupt Frenzy, which has a total of five awesome songs for you, divided into two rocking weeks:

Defeat Ambion and escape from hell!

No matter in which of the two modes you are playing, give it your best to reach the end of the songs while playing all their notes according to the charts since that is how you win.

This means that you need to watch for the arrow symbols matching above BF"s head and press the same keys yourself, without missing keys too much, because if that happens, you lose and have to start again.

Good luck to you all, we wish you the best, as per usual, and we hope that this is far from the final new FNF game of the day you play here today!