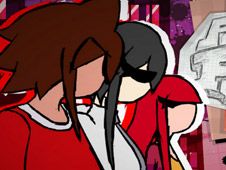 What is FNF Showtime?

FNF Showtime is quite the awesome new mod for you to play in our category of Friday Night Funkin' Games online, because instead of having one antagonist to face off in three songs, like it is usually the case, you actually have three girls you will battle against, each with their own custom song, and the girls are called Maavo, Maritza and Ivette, while their songs are the following tracks:

Defeat the hand-drawn sisters in an unforgettable rhythm battle!

Whether you play in the story mode or the free play mode, your goal will remain the same, which is reaching the end of the songs and playing all their notes accordingly, since that is how a musical battle is won here. This means that when arrow symbols above BF's head match, you will have to press the same arrow keys from the keyboard.

Keep at it to win, but be careful, because if you miss pressing the keys too many times in a row, you are going to lose the game and have to start it again from scratch. Good luck we wish you all, inviting you to stick around for even more fun that is to come!