Way of the House Husband Jigsaw 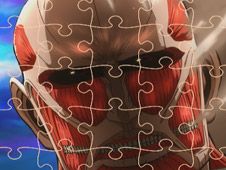 What is Attack on Titan Jigsaw?

There is no more popular anime to have appeared in the past few years than Attack on Titan, the mega-hit that first premiered in 2013, and is ending this year, which has been a total rollercoaster of fun, horror, and action, and considering how many fans it has world-wide, we should have had Attack On Titan Games online here sooner, but here we are, nonetheless, inviting you all to play Attack on Titan Jigsaw!

Solve the Attack on Titan puzzles online, right now, and have fun!

This is a game that has a total of 12 puzzles for you to solve, but just the first six ones are available at the start of the game, but after finishing them, you will be able to unlock all the others as well.

Each puzzle can be solved in either the easy, medium, or hard levels of difficulty, and depending on the one you've picked you can play with more or fewer jigsaw pieces.

Use the mouse to pick up the puzzle pieces after they have been spread randomly on the screen, and put them back together until you have a full image to complete that level.

Good luck to you all, and we hope that you check out both the Jigsaw Games page and the Anime Games page when you are done with this game that is both!