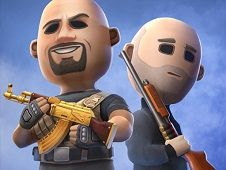 What is Battlefield Elite 3D?

A new pixelated action game is waiting for you to try! For a beginner, you will have to choose which character you want to be in the game, after which, in a short time, you will be pushed into the middle of the war that has just begun. The game is an IO Multiplayer shooting game in which you will be alone against other players around the globe. Your mission will be a classic one, you will have to go through the forest full of fighters and try to shoot them in the shortest possible time.

The danger is at every step!

Great care to all the other players who came into the game with you! None of these are on your side; In this mission, you will be alone, which is why you will have to be careful with every move you make so that you are not killed. Many soldiers sit at the panda in the woods, looking for trees, rocks, or other objects, which is why we advise you to go slowly and keep your eyes peeled! In the right pad of the game, you will find the ranking of the players, the one who manages to make the most kills will be at the top of the ranking.