FNF vs Richard the Crypto Adviser 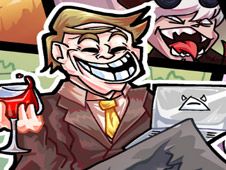 What is FNF vs Richard the Crypto Adviser?

Richard is not the guy you want giving you crypto advice, since he will probably scam you, so when BF heard that, he challenged him to a musical battle as soon as he could, so that he won't be able to do his scams anymore! Well, we invite you all right now to play the game called FNF vs Richard the Crypto Adviser, our latest FNF mod, and defeat this scummy antagonist on the following custom songs:

Defeat Richard and take his crypto away!

With this being a full week mod, you can play the game in either the story mode or free play mode, it's up to you, with your goal being the same in either, which is reaching the end of the songs by playing all their notes according to the charts, and then you win.

To do this, use the arrow keys, press them at the same time as the arrow symbols above BF's head are matching one another, but be careful not to miss doing that too many times in a row, or you lose the whole game and have to start it again. Enjoy!