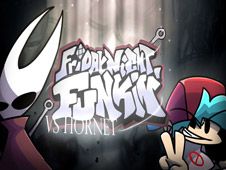 What is FNF vs Hornet?

After a giant egg, it is time for Boyfriend to face off against another creature from nature which can apparently sing and rap, and that is a Hornet, the latest antagonist you have to face off against in a musical battle from FunkJam, and this full week mod includes the following songs for you:

Defeat the alien Hornet and free the Earth!

In both the story mode and free play mode of the game, give it your very best to reach the end of the songs, playing all their notes according to the charts, since that is how you win.

To achieve this, press the arrow keys at the same time as the arrow symbols above BF's head match one another, and keep doing it without missing too many notes in a row, or you will lose.

Good luck, enjoy, and we hope that you stick around for even more fun to come, since the whole day will be filled with awesome games for you!