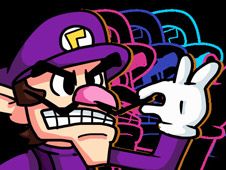 What is Friday Night Funkin VS Waluigi?

All of the previous crossovers between FNF Games and Mario Games we've had on our website so far had been received very well by our audiences, so there is no doubt in our minds that the same will be true right now and here for Friday Night Funkin VS Waluigi, where this evil Mario character you will have to defeat through music, not mushrooms, and you will do it on the following custom songs:

Boyfriend VS Waluigi, the battle you've been waiting for!

In both the story mode and the free play mode of the game, your role is to reach the end of the songs and play all their notes according to the charts, meaning that when arrow symbols above BF's head match with one another, you will have to press the same keys.

Be careful not to miss pressing the keys too many times in a row, because if that happens, you will lose and have to start all over again from scratch. Enjoy!