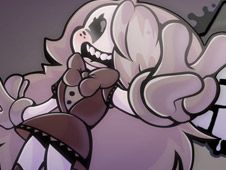 What is FNF vs Chira?

Chira is a woman who looks like she is from the 50s, and that is because she is, where she has the power to turn people around her into that cartoonish kind of character, so for you to stop that from happening, you now need to help Boyfriend defeat her in a musical battle, something that you will do on the following custom songs:

Duel Chira and get a blast from the past!

When you see arrow symbols above BF's head matched with one another, make sure to press the same arrow keys on the keyboard yourself, and keep doing so until the end of the song in order to win.

Be careful not to miss pressing the keys consecutively too many times in a row, or you lose. Also, you can play this game in either the story mode or free play mode, so pick one, and then let the fun begin. Enjoy!