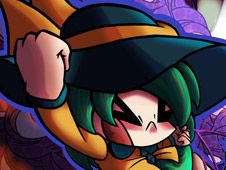 What is FNF vs Koishi (Heartly Paranoia)?

Anime characters from the Touhou Project have been very well received in our category of FNF Games online, which is why we are delighted that there are more of them for us to share with you all, just like it is happening at this moment when we've added for you the awesome game called FNF vs Koishi (Heartly Paranoia). Against this green-haired anime girl you will fight on the following songs:

Defeat the anime girl with music!

You can choose to battle the antagonist in either the story mode or the free play mode of the game, it's totally up to you, with your goal being the same, which is reaching the end of the songs by playing all their notes appropriately, according to the charts.

This means that you need to watch for when the arrow symbols above BF's head match with one another and press the same arrow keys, something you have to keep doing until you win the game. Try not to miss too many notes, or you will lose the whole game.

Start now, and make sure to tell your friends about our awesome games too, there is no doubt in our minds they will be having lots of fun as well!