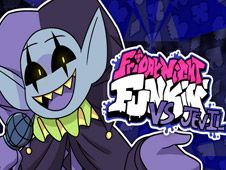 What is FNF vs JEVIL?

Jevil is the newest antagonist you have to defeat in a musical battle, something that you have to do in order to escape the Card Castle, where you, like BF, were captured and locked in together with GF, so only by defeating this evil jester will you be able to see the light of day, and you will do it on three awesome custom songs, such as:

Defeat the evil Jester and escape his terrors!

Of course, it's your pick if you play this game in the story mode or free play mode, as well as the level of difficulty. Either way, your goal remains the same, which is to play all the notes of the songs, reaching their end to win.

To play notes in this kind of game, watch for when the arrow symbols above BF's head match with one another, and make sure to press the same arrow keys at the same time, something that you have to keep doing until the end of the song.

Be careful about missing notes, because if it happens too many times in a row, you will eventually lose. Good luck, have fun!