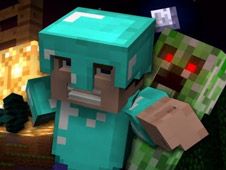 It's always a good day when brand new FNF mods with Minecraft get added over to our website, just like we are happy to say is the case right now and here with FNF: Boyfriend Sings Minecraft Revenge, where BF, Skid, and Pump, all play the Minecraft Revenge song, which is a parody of DJ Got Us Fallin’ In Love.

Sing Minecraft Revenge for a ton of fun to be had!

Well, as per usual, watch for when the arrow symbols above your character's head match with one another and make sure to press the same arrow keys yourself, something you have to keep doing until the end of the song if you are to win.

Be very careful not to miss pressing the keys too many times in a row, since too many misses one after another means having to lose, so don't allow that to happen for anything in the world. Enjoy!