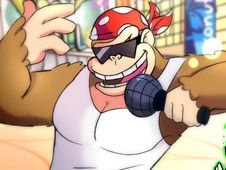 What is FNF vs Funkin Kong?

Kong, the huge monkey, is the newest video game character that you and Boyfriend are going to rap battle in our category of FNF Games, where right now we are delighted to share with you this awesome mod where you will duel it out on the following songs:

Defeat Donkey Kong through the power of music!

To hit the notes of the songs at the right time, watch for when the arrow symbols above BF's head match one another, and, when they do, press the same arrow keys at the same time and keep doing it at the end of the song to win when you will see the progress bar fully towards you.

Be careful not to miss pressing the keys too many times in a row, or you lose. It's your pick to play in either the story mode or free play mode, pick a level of difficulty, and give it your best to win, but also to have fun!