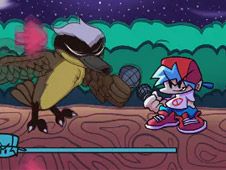 Bem-te-vi (Arwen Great-Kiscadee) is a meme from Brazil that features a bird, a bird that can apparently keep a tune very well, which is why it is worthy enough of being the newest antagonist to Boyfriend in a rhythm battle, so we hope that you are going to defeat this new character right now, on the following awesome songs:

Use rhythm to defeat the Brazilian bird!

In either the story mode or free play mode, give it your best to play all the notes of the songs at the right time, so when you see arrow symbols match above BF's head, you need to press the same arrow keys yourself and keep doing it until the end of the song if you want to win.

Of course, it goes without saying, but if you miss pressing the keys too many times in a row, you lose the whole game and have to start again from the top of the songs, so be very careful not to let it happen. Good luck!