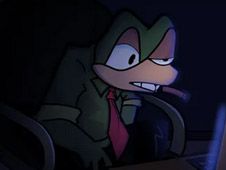 What is FNF: vs KadeDev?

KadeDev is the most popular engine owner in the world of FNF, since most of the mods you find and play here run on that engine, and now it has become a character in itself, a frog with a suit and a cigarette in his hands who can be quite grumpy, and who you and Boyfriend will now have to defeat through music on the following songs:

Boyfriend Vs KadeDev, the battle you've been waiting for!

Well, you will pick between the story mode and free play mode, choose a level of difficulty, and then give it your very best to reach the end of the songs by playing their notes according to the charts, since that is how you win!

This means that you need to press arrow keys at the same time that the same arrow symbols match above BF but be careful not to miss the timing too many times in a row, or you lose the whole game. Enjoy!