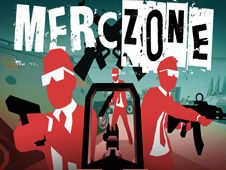 What is Merc Zone?

You can always bet on our administrative team offering the visitors of our website new io shooting games 3d online of the highest quality, which is what will be going on right now and here when our administrative team is sharing with you the awesome new game called Merc Zone, where you become a mercenary going up against other mercenaries, all of you being real players competing in the same arena!

Be the best merc out of all of them!

As you go around the arena, make sure not to get shot by enemies yourself, but instead, have killing streaks where you defeat one enemy after another, collecting bounties along the way by defeating them and climbing in the worldwide rankings.

You are thrown on different maps, where you can collect new weapons, upgrades, and cool stuff, and, of course, you can also be various classes of warriors:

As for how you navigate this shootout world, use the W, A, S, D keys to move, jump with space, shoot and aim with the mouse, the mouse scroll to change weapons, R to reload, G to throw grenades, C to crouch, F to interact.

Now that you know all this info, you will be able to give this game your best from the get-go, no doubt, and we are sure that not only will you do great, but also have tons of fun at the same time!