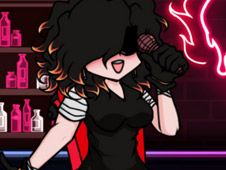 What is FNF: Singe and Sear?

Singe and Sear are the latest two crazed antagonists that you and Boyfriend will have to defeat in a rhythm battle on our website, where right now we are inviting you all to have tons of fun with the game called FNF: Singe and Sear, where you have a total of eight awesome songs to go up against these characters in:

Defeat the incredible duo of Singe and Sear, and remain king of music!

To hit notes in this kind of rhythm game you need to use the arrow keys, so press them at the same time as arrow symbols above BF's head match with one another, and if you keep doing it correctly until the end of the song, you are going to win the rhythm battle.

Be careful not to miss pressing the keys too many times in a row, since that leads to your loss. Play in either the story mode or free play mode, at a level of difficulty of your choosing, and give this game what you have best, from start to finish!