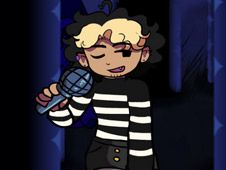 Taki, Demon Cesar, and other characters from Friday Night Funkin Fever, one of the most popular mods of the category, are all back, but this time they are not antagonists, but together they have to sing the song known as Endless, something that you need to help them out with, as you are a master of rhythm yourself!

Sing Endless with the FeverTown characters!

No matter which character is singing what verse, your goal is the same, to help them hit all the notes correctly, according to their charts, so when arrow symbols above their heads match one another, you will have to press the same arrow key. Keep doing it until the end of the song to become the winner.

Know that not focusing and missing to hit the notes too many times in a row leads to you losing the game, so be careful not to let it happen, but instead give your best to win. Enjoy!